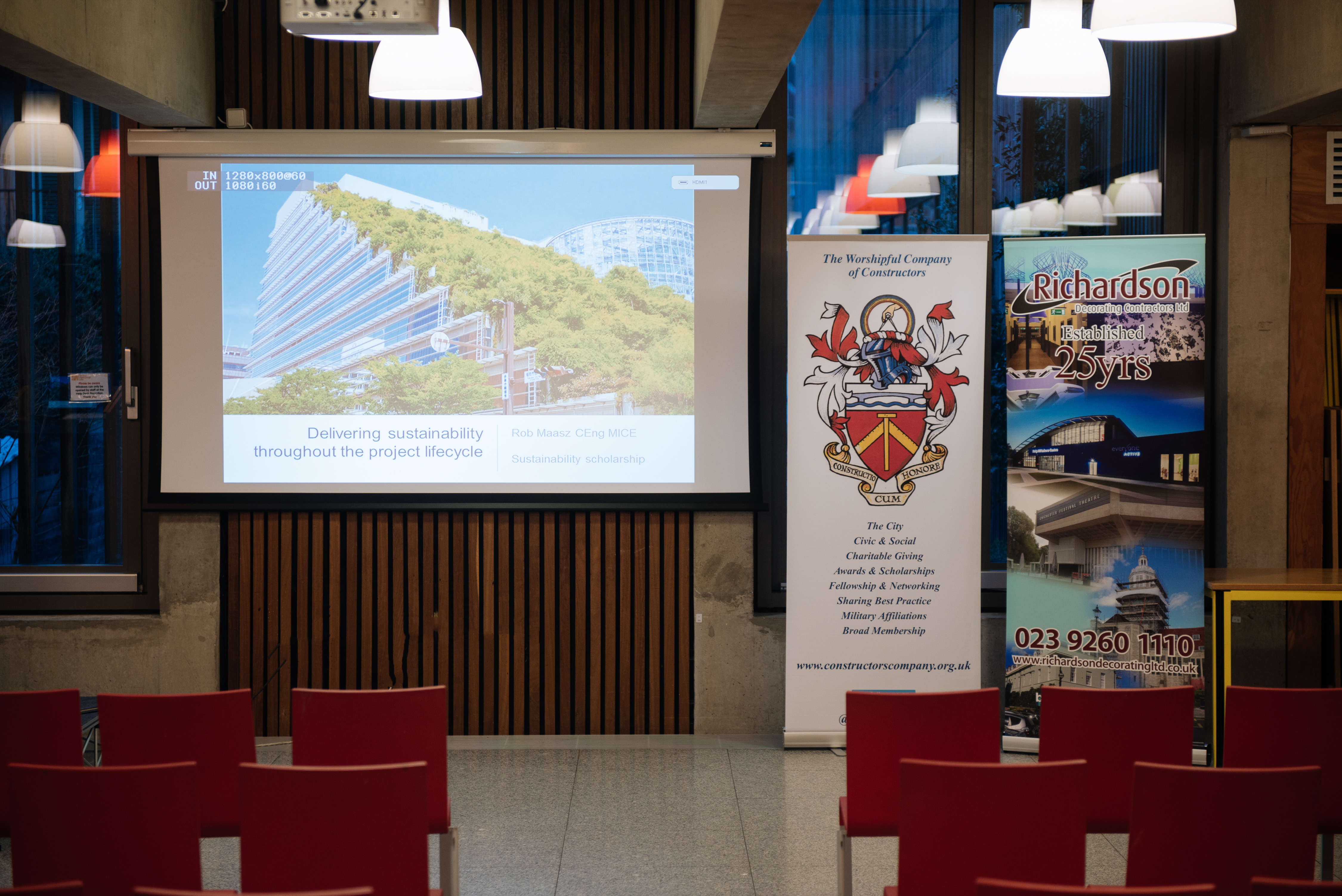 The Sustainability Scholarship Presentations took place at the Coin Street Community Centre in Waterloo on 21st March 2018.  The Scholarships are sponsored jointly by the Worshipful Company of Constructors, the University College of Estate Management and the Chartered Institute of Building, and this year there were 3 scholars. The first was Robin Maasz of Gatwick Airport, whose paper addressed the challenges created by “delivering sustainability throughout the project lifecycle”.  His key message was that sustainability needed to be addressed from the outset of a project.  It was integral with the project and could not be considered as an “add-on”.  The Client needed to be involved and be supportive of sustainable development from the very start.  The research identified that there were a number of key influencing factors in the development and implementation of any project – the influence of the client; the approval of funding, accountability, strategy, leadership and management.  Each of these factors was found to play a critical role in how sustainability was considered throughout the project.  A key aim of the research was therefore to provide a simple tool for Clients to utilise when considering sustainability as an element of their project.  Robin’s paper can be downloaded here. The second scholar to make a presentation was Peter Jenks of Richardson Decorating Contractors Ltd, whose paper addressed a “sustainability evaluation of the use of solvent-based vs water-based trim paint”.  It was well known that over the past few years there had been a move away from conventional solvent (oil)-based paints to the more ecologically friendly water-based variety.  The paper presented was particularly topical as BREEAM had just published new guidelines in their 2018 UK non-domestic construction manual which even further limited the use of traditional solvent-based paints in non-domestic construction.  Peter’s research had identified that the reduction in Volatile Organic Compounds (VOCs) in paint for buildings had produced some unintended consequences and that whilst previous reductions had been made in VOC content in manufactured paint they were often negated by local work-around solutions when using the paint.  It was now time for the constitution of water-based paints to be considered by all stakeholders – manufacturers, contractors and indeed the end-user – the painter on the job.  Peter’s paper can be downloaded here. The third scholar was Hannah Clement of Kent County Council whose subject was  “The Business Case for Organisations in the UK Construction Industry to set Science Based Targets”.  Hannah did not present at this session, although she did attend, and, like the other scholars, was awarded her prize and certificate, as can be seen in the pictures below.  Hannah’s paper will be the subject of a webinar that is being arranged by the CIOB, and, if this is successful, it may be that future papers will also be disseminated in this way, so that they can reach the world-wide audience that such papers deserve.  Hannah’s paper can be downloaded here.

The Awards were made by Jonathon Hubert (University College of Estate Management), Professor Charles EGBU (CIOB), Arthur Seymour (Renter Warden of WCC) and Bob Heathfield (Honorary Court Assistant of WCC and Chair of the Scholarships and Awards Committee), who are pictured left to right below with the scholar standing in the middle.