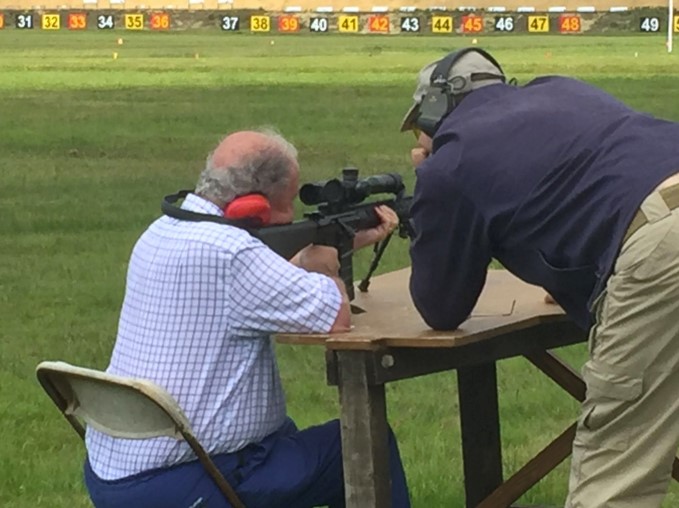 This post has now been updated with an article on the event taken from the RAF Benevolent Fund website.

A 3 man team attended representing the Constructors comprising Past Master John Trussler, Court Assistants Henry Lamb and Iain Meek; along with Constructor Simon Odam who joined with the United Guilds force for the day.  All profit from the event went to the Royal Air Force Benevolent Fund. The team arrived early on the Thursday evening to undermine the opposition and enjoy a fine meal and good fellowship.  Accommodation varied from spartan with the Army to archaic with the Canadians with a polar bear, bison, and moose. Disciplines on the day included target at 900 yards; sniper at 300 yards; gallery .22 and blackpowder pistol (cowboy Colts); and pump-action and automatic shotgun! The weather was excellent- hot, and humid with variable winds to make 900 yards a challenge for our tutors.  The team wisely stayed on for dinner and further fellowship at the RAF Clubhouse on the Friday night.

As usual, one of the Gunmakers’ teams won.  Our Mr Odam won a prize with the cowboy guns.  No animals were injured in the making of this day (only our pride).

The Bisley site is worth a visit to inspect Edwardian kit-building techniques and the NRA museum is definitely worth a visit if only to marvel at the largest solid silver trophies imaginable (courtesy of various maharajas).

As ever, thanks to Colin Sach, Past Master of the Bakers for organising us all.  Do please contact Iain Meek if you are tempted by a great day out next year.

The RAF Benevolent Fund website has now reported that the event raised £5,000 for their work – a by no means small amount, and with a good day being had by all attendees it would be good to take part next year.

One of the participants was Colin Sach from the Worshipful Company of Bakers, who provided the following for the RAFB website:

“On a lovely warm and sunny morning 36 liverymen from 13 companies, met at the RAF Target Rifle Club pavilion at Bisley.  Without a doubt, Bisley is the world’s most prestigious rifle shooting venue.

The purpose of the first Inter-Livery Rifle Shooting Competition, sponsored by the Worshipful Company of Bakers, was to come together in a friendly competition to broaden the livery fraternity and to donate the surplus to the RAF Benevolent Fund. Chris Hockley, from the RAF rifle club gave an excellent briefing while the liverymen tucked into bacon rolls, Danish pastries and coffee.  We were to shoot five disciplines – a 900 yard target rifle range, a 300yard McQueen sniper rifle competition, a 50 yard gallery rifle, antique pistol and a 50 yard .22 competition.  The day was paused for an excellent two course lunch back at the clubhouse, and soon we were back in action on the ranges for the afternoon.

We ceased shooting at 4.30pm and while scores were computed and prizes decided upon, most visited the museum at Bisley which highlighted many of the great occasions and the weapons used  during the 150 plus years of its operation.  Many people do not realise that in the late 1900s the Imperial meeting at Bisley attracted far larger crowds than Wimbledon or Wembley attract today, and a visit to Bisley was part of the contemporary summer social scene.

Finally, it was back to the clubhouse for tea, an open bar and prize giving. The overall winning team were the Gunmakers, closely followed by the Clothworkers, who fielded the winning individual.

The day was a great success and the overall donation to the RAF Benevolent Fund was £5,000.”