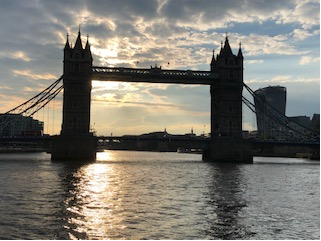 The Master (Michael Parrett), PM David Hattersley and Freeman Be de Sanges.  The Mistress, Jessica, can also be seen talking to Alison and Ellie Withers. A fine evening on 24 May saw a small band of Constructors and their guests venture onto the River Thames for a cruise both up and down river from Tower Pier.  We enjoyed both drinks and canapés aboard the boat and the pictures show our party enjoying themselves during the trip, which included a short trip up to Westminster .  We then turned about and went down river as far as Limehouse and Canary Wharf before turning back towards Tower Pier.  We were very lucky in that the rain held off until those who were dining after the cruise made their way towards the Sherlock Holmes Public House in Northumberland Avenue, where a good time was had by all.

Our thanks must go to JW Terry Withers, who made the arrangements for the evening.

Statement by Middle Warden, Terry Withers, on the formation of the WCC Climate Action Group

"I would also like to congratulate our Sustainability Scholars, Safak and Alex on their fascinating…