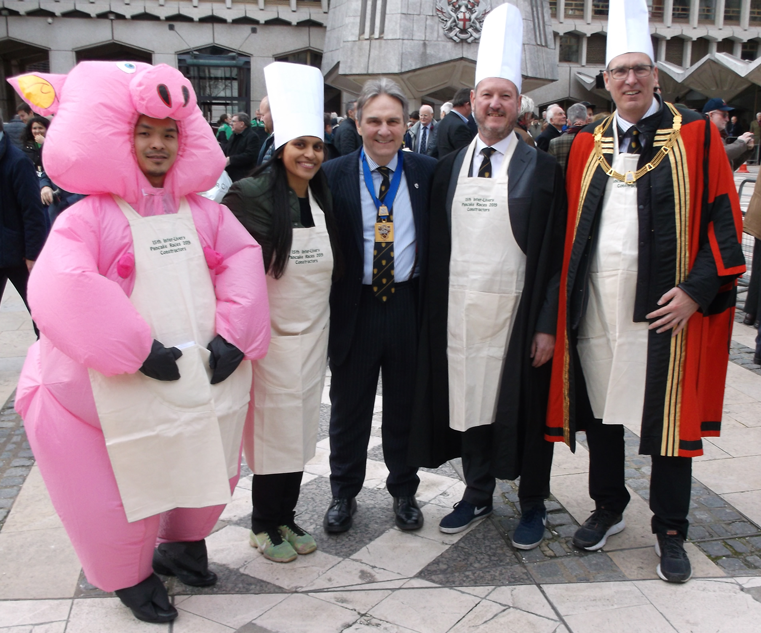 Shrove Tuesday (5 March) 2019 saw the 15th running of the Inter-Livery Pancake Races in Guildhall Yard.   The races are organised each year by the Worshipful Company of Poulters and have become both a hotly contested event amongst the Livery and a somewhat whacky entertainment for the spectators.

This year we were blessed with both fine weather and an excellent team, so much so that, for the first time, we won one of the classes.  Our team consisted of: The Constructors’ team of eminent “Tossers” is pictured above, with the Master, Michael Parrett who, with the Mistress and other members of the Company, friends and relations cheered the team on to what was, at least in the Ladies’ race some significant success when Yeoman Anjali Pindoria was declared the winner of the race and received the, now revered, Frying Pan, which she and the Constructors will hold until it is competed for again in a year’s time.

Lady Mayoress and the Non-Aldermanic Sheriff also presented Anjali with a Certificate, which was accepted on her behalf  by the Master.

It was perhaps fitting that, given the Master’s theme of International Relations, our novelty racer was clothed as an inflatable pig in honour of this year being the Chinese year of the Pig.

To view a short video of the Final race please click here.