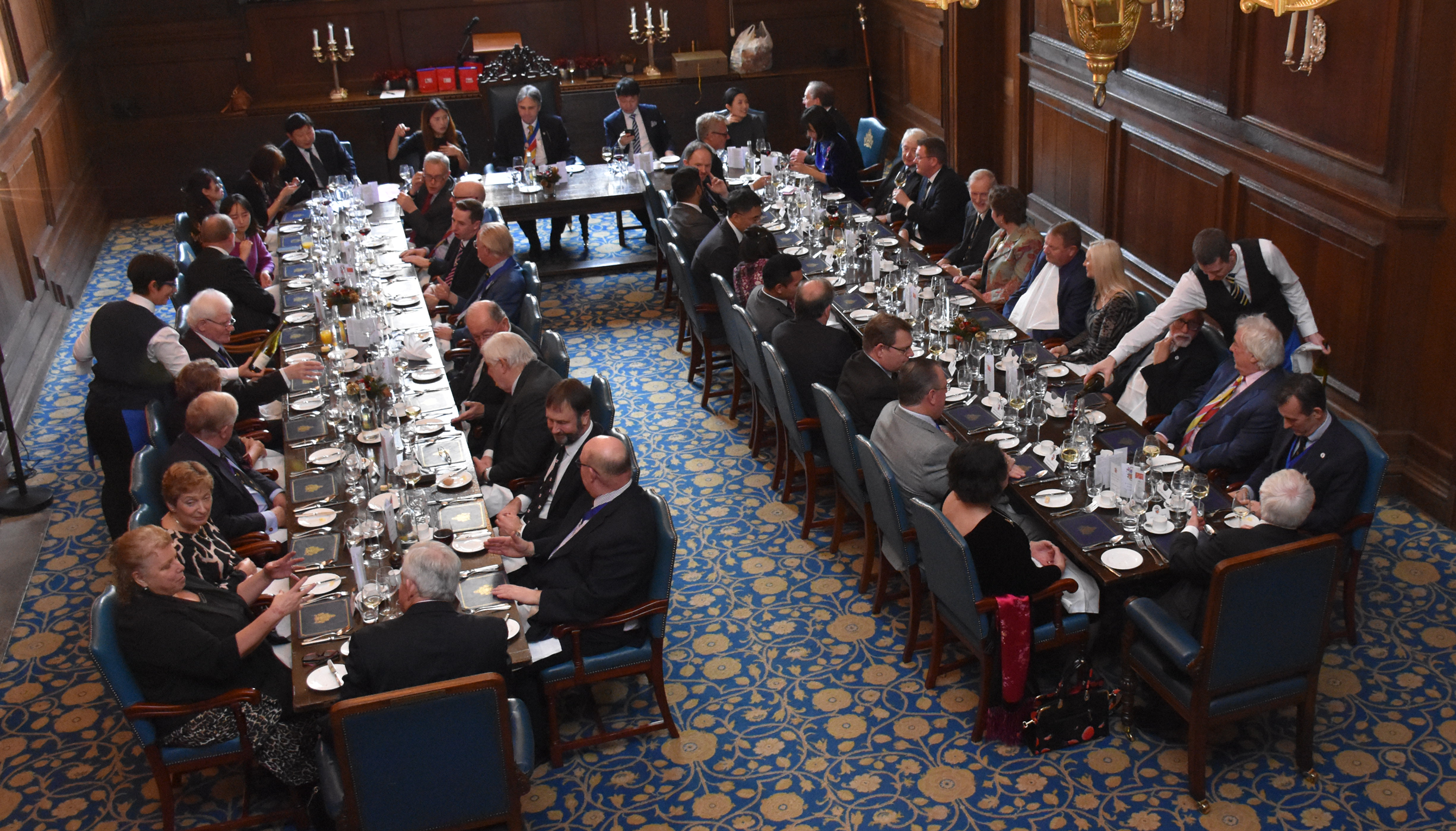 On 17th December the Worshipful Company of Constructors was pleased to host an official delegation from Rugao, Jiangsu province at a lunch held in the impressive surroundings of Innholders’ Hall.  The Chinese delegation, Ms Wei Xu, Mr Xia feng Du, Ms Yu Jiang and Mr Jian Shi were led by His Excellency Chairman Daojian Wu of the People’s Congress standing committee of Ruago.

The lunch was a delicious 4-course fine-dining experience created by the Innholders’ Michelin starred chef Herbert Berger and it was enjoyed by some 50 diners in the compact, but none the less exquisite Innholders’ Hall.

Despite some difficulties with the obvious language barrier, both the Master and Chairman Wu addressed the assembled diners, with translation being ably provided by Vicky Brown of BRE and  Alderman, Professor Michael Mainelli spoke on behalf of the City of London, addressing both the Company and our guests on the shared topics of the construction of a modern technological city and the Green revolution, and thanking everyone for coming together to use technology and finance to save the planet and celebrating our common goals. Chairman Wu said that it was a great privilege for him and his colleagues to be with the leaders and the elite from all walks of life in the City of London.  He talked about the City of Ruago.  He described it as an open and inclusive city that attached great importance to strengthening economic and trade co-operation with Great Britain and other European Countries.  He recognised that London is the major financial centre in the world, being a leader in new technologies, new business forms, finance, smart management and other fields.  He went on to say that the purpose of his visit was to strengthen the relationship between Rugao and London, promote exchanges in science and technology, culture, economic and trade co-operation between the Enterprises of both places, jointly creating value, achieving mutual benefit and developing a win-win situation and writing a new chapter of exchange and co-operation between Rugao and London.  In conclusion Chairman Wu invited everyone to visit Rugao for investigation, sightseeing, leisure and investment co-operation – he was sure that all would gain a lot. The Master speaking at the luncheon

The Master responded to Chairman Wu’s address by thanking him for his introduction to Rugao and the opportunities that existed for further co-operation between our great cities and countries, and on behalf of the Worshipful Company of Constructors and the City of London he offered the entire delegation a warm welcome to London.  He reminded everyone that he, the Mistress and their family were no strangers to China, having relatives there and having regularly visited the country and witnessed the economic miracle and development that is modern China as we know it today.  He also recalled that he and the Mistress had visited Rugao some three years ago, finding it to be both an enlightening and unforgettable experience.  They had learned about Rugao’s ambitious plans for the growth and economic expansion of the region and were impressed by the rate of development of infrastructure and the way in which Rugao was reaching out to countries beyond its shores to promote economic, cultural and educational co-operation.  In conclusion, the Master drew upon the writings of the ancient Chinese philosopher. Confucius, who once said that “A superior man is modest in his speech, but exceeds in his actions”.  He said he was most grateful for Chairman Wu’s address, which was both “modest” in its approach but also demonstrated “action” in that he had extended a very kind invitation to people in the City of London to visit Rugao and learn more about the opportunities that exist in Rugao and the wider Jiangsu province. Professor Michael Mainelli, an Alderman for Broad Street Ward and a Council Member of Gresham College, also addressed those at the luncheon.  He marvelled at the difference between China when he first visited the country in 1983 and what he found when he went back again a few weeks ago.  He recalled that he was asked “what had changed” – to which he had replied that the only thing that hadn’t changed, much, was the Pearl River – apart from that, he recognised nothing.  Professor Mainelli recalled that in times past, a luncheon of Chinese and Londoners would have been rare, but in today’s highly interconnected world such luncheons were more common, but were still very special.  Alderman Mainelli also emphasised the importance of the “Green Revolution”, something that was being worked on in both Jiangsu and London and emphasised that the true City works within an open and tolerant community of people according to “Dictum Meum Pactum”, “my word is my bond”.  His closing message was that “London remains most open to trade on technology and finance with all”. The Rugao Delegation with the Master and Mistress Constructor

This was a new adventure for the Company and in a “new” location.  Given that one of the Master’s themes for the year is International Relations, it was not only most appropriate, but thoroughly enjoyed by all.  We had not been to Innholders Hall for some time, and hopefully we will return there again in the future.

The Master has sent this message to all members, and it is repeated here…

The Worshipful Company of Constructors is proud to announce the Scholars for 2021.  They are:…