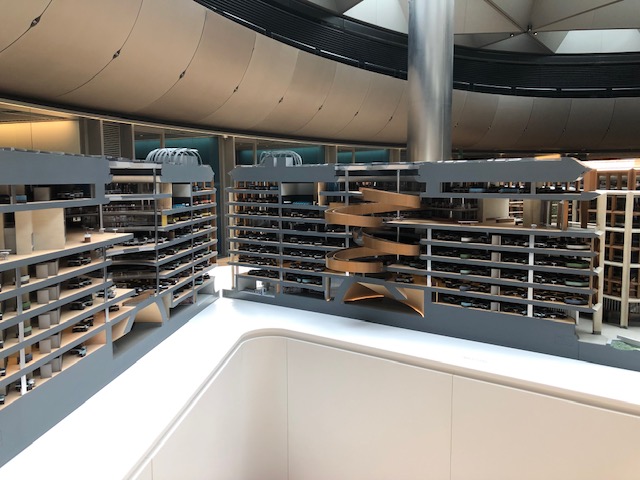 On 10th July a small group of Constructors, organised by JW Terry Withers and his wife Alison, paid an extended visit to the new London HQ of Bloomberg, at Cannon Street in the City (a model of the building is depicted above).

The building (in fact two buildings, with one half carefully mothballed for future expansion), was designed by Sir Norman Foster (The Rt Hon the Lord Foster of Thames Bank, OM, Kt),  opened in 2017 and houses 4,000 workers.  On our tour, generously guided by the Bloomberg team, we moved through the spectacular entrance hall designed by Olafur Eliasson, to see how different work levels all focus vie gently spiralling stairs and transparent lifts on a communal sixth floor “breakout area” for coffee and snacks, with its view over neighbouring St Paul’s Cathedral.  We learnt about the building’s spectacular BREEAM rating, and saw on the roof and in the spotless basement how building services are maintained with minute attention to overall energy and waste performance.  It was fascinating to hear also how Mike Bloomberg and Lord Foster seem to have sorted the key design issues and details “one to one”. After a lunchtime retreat to a nearby hostelry, we visited the Mithraic Roman Temple buried right under the building.  There, in two underground levels we saw the sensitively displayed 3rd Century CE temple and a sample of the huge range of artefacts recovered from the various works at the site ever since a German bomb struck it at the height of WWII.

A fascinating visit to one of the City’s newest, and one of its oldest, buildings, both in the very heart of the Square Mile.

The Master’s Weekend in Cambridge

Over the weekend of 12th to 14th July, the Master held his UK weekend in…