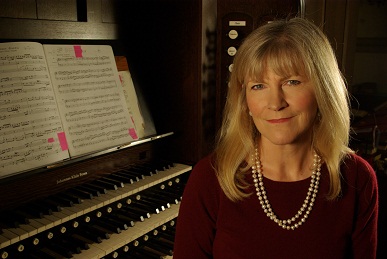 Unfortunately, Catherine died on Christmas Eve following a long illness, so we will no longer be able to be thrilled by her skilful playing of the Klais organ that she introduced to St Lawrence Jewry in 2001.

Our Honorary Chaplain, Canon David Parrott, has written to the Clerks of all the livery companies associated with St Lawrence Jewry as follows:

It is with great sadness that I write to let you know that Catherine Ennis, our organist, died on Christmas Eve after a battle with cancer. She has been organist here for 35 years and has played for many livery services over the years. I have no more details yet, but I believe it will be a private family funeral in Shropshire where she and John lived in recent years. We will then work out whether there is anything more we can do here at SLJ.

You will not be surprised to know that I have lost a much-valued colleague and friend, who has played a significant part in the music life of our great City over many years.

May I ask you to the let your Court and others know.

With my prayers and best wishes.

Catherine was a much respected member of the Organist fraternity.  She provided specialist advice on many new organs throughout the World, was President of the Royal College of Organists for two years from 2013 and recently became patron of the Society of Women Organists.

Canon Parrot has recorded a short tribute which is available HERE.

On Wednesday 6 January the following notice appeared in the Times: