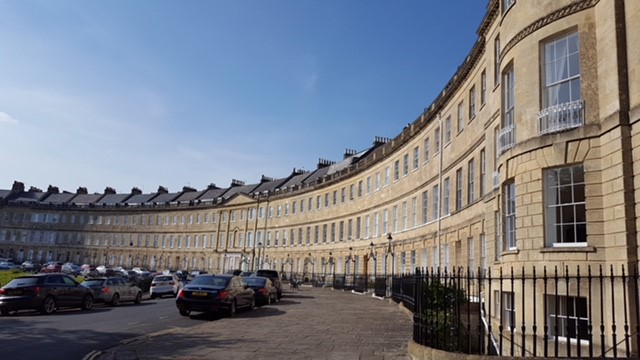 The Master’s Weekend 2018 was held in the beautiful City of Bath. The Master, Tony Ward, together with the Mistress, Jan Ward, organised a most splendid and varied programme of events, many of which were held in parallel to accommodate the differing demands of the guests, and for ease of reference these were titled the Mens’ programme – hosted by Tony, and the Ladies’ programme, which was hosted by Jan, although there was no gender compulsion involved and several men enjoyed the “Ladies” events as well as several ladies enjoying the “Mens” events. This was a new innovation and certainly seemed to go down well with the 37 guests that had joined the Master and Mistress on their weekend. We all made our way to Bath to arrive in time for Friday afternoon and the “Men” joined with Tony visiting Bath Abbey – where the adventurous (and fit) amongst the party took the tower tour (lots of winding steps to the ringing room and then on to the roof of the Abbey) – the others took a ground floor guided tour. Jan took her party to visit the Holburne Museum. We then joined up at 5pm for the civic reception, by the Mayor of Bath – Councillor Ian Gilchrist, in the Mayor’s Parlour at the Guildhall. The Master presented the Mayor with the Company Plaque and we were told about the City of Bath and were then shown the Council Chamber. Following the reception we returned to the hotel to ready ourselves for the inevitable food and drink onslaught, which started at the Martini Italian Restaurant, who did us proud. We then walked slowly back to the Francis Hotel – And so to bed!

On Saturday morning, following the hotel breakfast, we again split into two groups. The “Men” visited the Museum of the Bath Architecture Group, where they were treated to a most informative and knowledgeable lecture on the architectural origins of the City of Bath by Dr Amy Frost, a professor at Bath University and the Chair of the Architecture Group and on completion were taken on a walking tour of the City by two of the Mayor’s volunteer guides. They were shown not only the ordered Georgian front aspect of the Royal Crescent but also the less well ordered rear aspects, including the “hanging loos” which were added to the structures in Victorian times when plumbing became both desired and available. The “Ladies” went to the Fashion Museum and then walked to the Royal Crescent Hotel for Coffee and Cakes – and sumptuous they were too!

The two groups eventually joined up and then people went their separate ways for the afternoon – some continuing to explore Bath, some did some retail therapy and others went to a nearby hostelry to partake of some local ale and/or lunch before eventually making their way back to the Francis Hotel to prepare for the Evening’s Black Tie Dinner.

The Master had managed to arrange for the Black Tie Dinner to be held in the Roman Baths, and the assembled company was treated not only to some superb canapes at the champagne reception but also to a most interesting guided tour of the Baths prior to moving on to the long gallery overlooking the Roman Bath where we were served a delicious meal of hot smoked salmon salad, Canon of Royal Wootton Bassett lamb, Tuile basket with pineapple and coconut ice cream, all washed down with Red and White Italian wines and followed by cheese and biscuits, coffee and port. Both during the reception and the meal we were splendidly entertained by Jemima Phillips – a brilliant harpist who had previously played for the Royal Family. On conclusion we made our way back to the Hotel – And so to bed!

Sunday morning dawned bright and sunny and several of the Company made their way to Bath Abbey for Sung Eucharist. We were specially fortunate to be present at one of the last services in the Abbey before the East end was handed over to restoration contractors for some two or so years, and the Acting Rector (the Revd Stephen Girling) welcomed us by commenting on the appropriateness of our visit given the forthcoming construction works. The choir and organ were magnificent and the service was sung to the “Little Organ Mass” by F J Haydn – a truly memorable occasion for those who rarely have the chance to hear such grand music.

On conclusion of the church service we again made our way back to the Hotel, where we enjoyed the last formal meal of the weekend – Sunday Lunch – again washed down with copious amounts of wine. After lunch, many made their way home whilst a hard core of attendees stayed on and enjoyed a more informal meal at Loch Fyne prior to retiring to bed for the last time of the Master’s Weekend, having elected to travel home after breakfast on Monday.

All in all – a memorable and enjoyable weekend, and our thanks must go to the Master and Mistress for organising the weekend so well and also the splendid weather given the earlier time of year.

Next year’s Master’s Weekend is expected to be in Cambridge, and ALL members are welcome, not just the “usual suspects”. More details will no doubt follow in a future Members’ Newsletter, including the dates, so that you can set the weekend aside in your calendar.